Design and development of Tamil letters - 3

The final design was arrived as follows:

1. During the initial period, one more vowel was added on and off after a consonant or a consonant-akaram to indicate an additional akara sound. See the Maangulam inscription shown in the following figure. 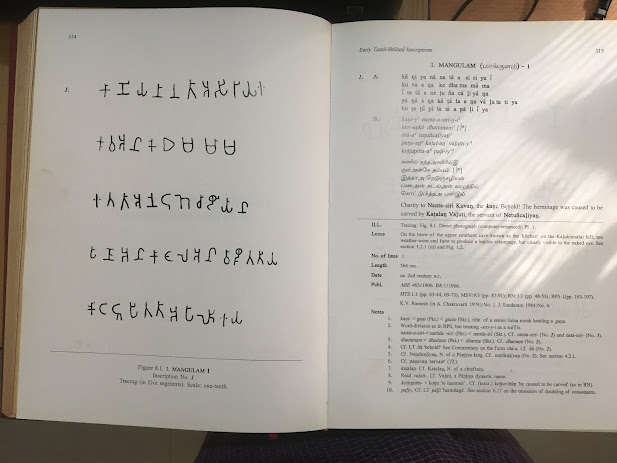 2. As per the basic design principle, a square with a single dash to the right should have represented a consonant-akaram CA. Unfortunately this symbol got changed to mean consonant-aakaaram CAA. See the Pugalur inscription practice in the following figure. 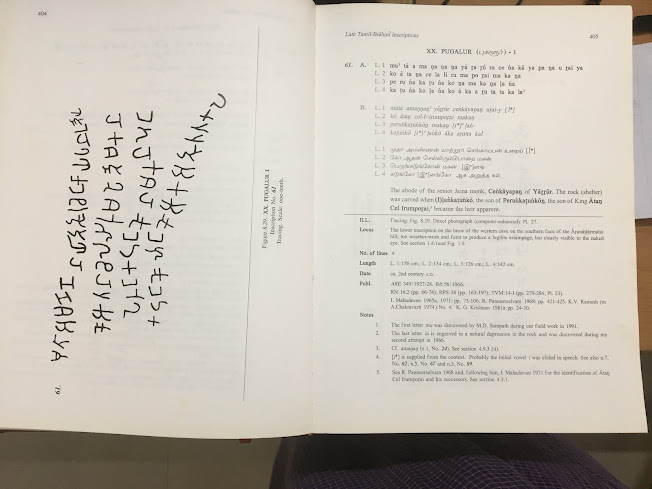 Depending on the actual context, the identities of CA and CAA were established. This ambiguity was not much realized between 700 BCE to 150 CE, since Tamils were aware about consonant coalescences in their language. [For ex., if க occurs, then the soft-consonant before that can only be ங் (ஞ், ந் cannot occur before க). Similarly ங cannot occur before க. If one finds ங before க it can denote only a consonant. Similarly, a combination like “கக” cannot occur in a word. This always has to be “க்க”.

Tamil speakers were aware about such regular letter occurrences as to which letter comes at the word-initial, which at the word-end, which becomes a C and which CA etc. In total, as long as thamizhi was employed to write Tamil, the difficulty in the script vis-à-vis க், க and கா (likewise all consonant C, akara consonant-vowel CA and aakaara consonant-vowel CAA) was not realized as a major problem. The language effectively camouflaged the inherent defect in the script. But that changes when Thamizhi was adopted to write Prakrit. 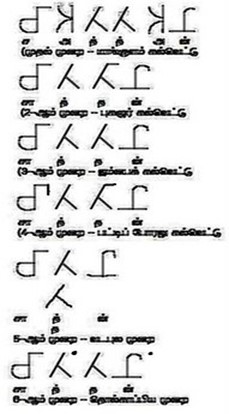 3. There appears to have been atlest 5/6 stages of Thamizhi script evolution. Unlike Tamil, Prakrit words can start and end with any letter. There were also not much of consonantal coalescences. There was no need to get a consonant-vowel after its related consonant. After ம், a consonant-vowel like க can come. Likewise, allowed letter combinations are different for Prakrit and Tamil. There was a special need to distinguish the C, CA and CAA when it was used for Prakrit. To solve this problem, 3 solutions arose.

4. First was the Bhattiprolu solution. Here, the consonant base was taken to be C. Consonant base with a dash to the right was taken as CA. A horizontal dash followed by a vertical dash was added to the base to denote CAA, as given below in the 4th row of the following figure. [Somehow the option of a square with 2 dashes was not chosen to denote CAA. We don’t know why.] If only, the Bhattipprolu model had been adopted, we would not have obtained the dot concept in Tamil for the consonant.

5. Second solution happened in the northern region. As per this model, if two alphaconsonants are stacked one over the other, top one was treated as a pure consonant and the bottom one alpha-consonant. [See the fifth row of the following figure.] If a dash is not added to the right, the stack would be read as C1 C2 A. If it is added, it would be read as C1 C2 AA.  Since there are no consonant coalescences in Prakrit, any consonant can combine with any other consonant-vowel like க்க, ச்க, ட்க, த்க, ப்க, ம்க. etc. In the modern time half forms are created to make the stacks horizontal.

6. The second solution was also a good one. Instead of understanding this 2000 year old solution properly through inscriptional evidences and script grammar, CDAC specialists who created ISCII in 1980s and experts in Unicode consortium have wrongly constructed a new theory called abugida to be the basis for Brahmi-like scripts. This theory is similar to an earth-centric theory in Astronomy (even though that facilitated a few useful astronomical calculations). Even for Northern languages, consonants are one of the bases for construction , just like heliocentric theory) and not alphaconsonants. Without understanding the second solution properly, abugida exponents are always explaining things in a round about way.

Since nobody reinvents a wheel in a vast country with extensive travel network, we need to come to a conclusion of simultaneous existence of all 3 solutions in different regions, when they were proposed. It cannot be said that one solution was earlier and the other latter. Perhaps the two best ones survived in the north and the south.  As for the final take-on design of Tamil consonants, a dot (புள்ளி) was added to the consonant base to indicate a pure consonant C and the first design was limited to CA; the second design to CAA.

Now coming to other consonant-vowel constructions, a square with 1 dash to the top represented the consonant-ikaram CI. A square with 2 dashes to the top represented the consonant-iikaaram CII. Subsequently the dashes starting from the top in both designs turned around to become kokki (கொக்கி) and chuzhikkokki (சுழிக்கொக்கி), when thamizhi developed into vattezhuththu (வட்டெழுத்து) and then viichchezuththu (வீச்செழுத்து). The point of rise of these markers was always maintained from the top during all these 2700 years.

Next we go to eekaaram. A square with 1 dash to the left represented the consonant-eekaaram CEE. The marker which started from the left turned around and produced oRRaikkombu at the Vattezhuththu and viichchezhuththu stage. Such a change is very natural and shows the fact that the left facing dash has become the kombu (கொம்பு). Again the old design principle is followed. (This may look odd with modern Unicode design principle of having the vowel markers to the right of the consonant base. But rendering solutions have been developed to take care of this vowel-sign.)

Similarly a square with 2 dashes to the left represented the consonant-aikaaram CAI. Two dashes which started from the left turned around and produced two oRRaikkombus written side by side separately. In Malayalam, even today this is seen. It was only during the viichchezhuththu period, (i.e. just 350 years bac)l that the two ORRaikkombus got merged into one and produced the aikaarakkombu.

As for ookaaram, a square with 1 dash to the left and 1 to the right represented both the consonant-okaram and consonant-ookaaram CO and COO. During the vattezhuththu and viichchezhuththu stage, Left side dash turned into a kombu and the right side dash turned into a kaal. Even in this transformation there is order if we compare with the earlier designs.

The dot (pulli/புள்ளி) was used to mark the consonant from the consonant base and for differentiating the vowels and consonant-vowels of ekaram/eekaaram and okaram/ookaaram (Probably, in the initial days this particular difference between the short and the long was not there in ekaram/eekaaram and okaram/ookaaram. [This discussion is avoided because it may lead to the problem of getting same meaning with 2 different pronunciations. Hence, if there is dot and a dash on the left over the square, then the letter would denote consonant-ekaram. Similarly for the consonant-okaram, a dot was added. Veeramaamunivar avoided placing the dot by introducing an iRattaikkombu for eekaaram and ookaaram and kept oRRaikkombu for the ekaram and okaram. Such a change did not affect the basic design of Thamizhi letters.

Now coming to the late designed aukaaram, a square with 1 dash to the bottom and 1 to the right probably turned into the aukaara design. Since intial specimens were not obtained. This can be treated only as a hypothesis.